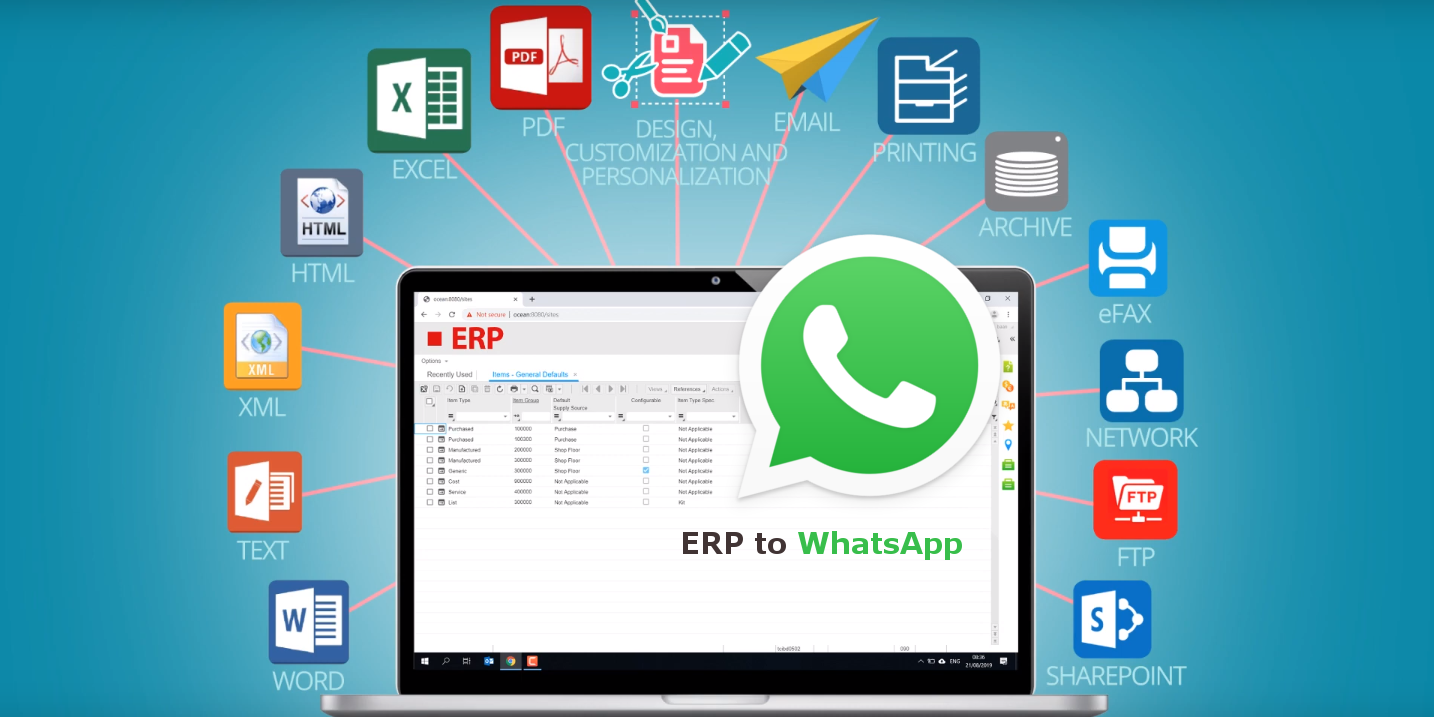 But ERP systems still refused to integrate with some of the most popular applications, like Microsoft Excel and Outlook, saying that these systems create islands of information. ERP systems wanted customers to do calculations on their own and wanted to E-mail from their own systems. But reality hit everybody in the face again and users preferred the familiar and rich applications they love. Many ERP systems provide these offices integrations natively, or use third party providers like NAZDAQ that streamline this process.

There is a new challenge now. There is a new set of applications that are very popular, but also ignored by the ERP market: Mobile applications. Probably the most popular is WhatsApp (Owned by Facebook) that is used by one billion users around the world with an average of 55 Billion Messages sent every day. While most use of WhatsApp is for personal use, is there room to use WhatsApp for business as well?

Some companies say that WhatsApp is not secure. The truth of the matter is that WhatsApp is very secure and has end-to-end encryption, so your messages and documents are secured from falling into the wrong hands. The following is a link from their web site – https://faq.whatsapp.com/general/28030015/

NAZDAQ has been up to the challenge as we have been a leader in connecting ERP systems with Office applications since 1997. When we first started, printing and faxing the printout was the most common way for business communication. Since then, E-mail has become very popular and still is, but companies may prefer sometimes to use WhatsApp to send certain documents or messages. These messages are received instantly whenever the recipient is online. Notifications ensure that received messages are acknowledged. Unlike email, instant messaging tends to elicit a response much faster. People are generally more willing to reply immediately. Responses received from users can be used to generate business events in the ERP system.

As an example, sending purchase orders to managers be approved using WhatsApp.  While managers are travelling and usually not using the ERP system, the Whatsapp application is a great way to communicate with them so they can view the purchase order, approve it or deny it quickly. The response of the manager can update the ERP system, therefore speeding the approval process.

The potential use for this two-way communication is huge. No need to wait for customers, suppliers or employees to send a response, and no need to interpret the response and update the ERP system. With WhatsApp, responses are fast, brief and clear.

WhatsApp’s mission is to let people communicate anywhere in the world without barriers. Using B2Win Suite Enterprise Edition allows companies to choose the preferred method of communication channel with their business partners, including E-mail, Fax, Printer and Instant Messaging, namely WhatsApp. Let us know how we can help you.

Bader founded NAZDAQ in 1999 and acts as its president since then. He earned a B.Sc. in Computer Science (1991) and an MBA (2001) from Technion – Israel Institute of Technology in Haifa. Bader held positions in the ERP arena in Israel, the Silicon Valley, and the Boston Area, as IT manager, Senior Consultant, and Product Architect.